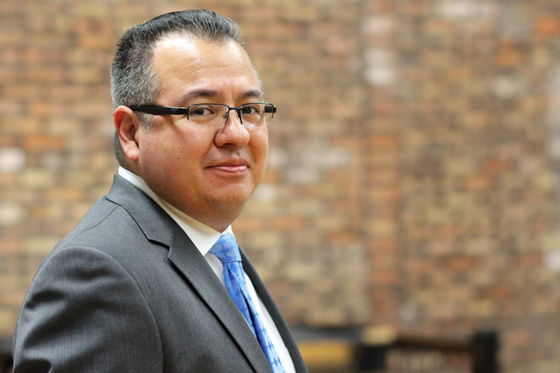 Carlos Ramirez has returned to a role on the Erie Neighborhood House Board of Directors, having previously served while holding the role of president of the Erie Associate Board (bylaws state that the president of the Associate Board will also participate on the Board of Directors). His new role was affirmed by fellow board members at a meeting last month.

A resident of Chicago’s Humboldt Park neighborhood, Carlos is Bureau Chief of Civil Rights for the Illinois Department of Transportation and has been a tireless advocate for the mission of Erie House over the past decade.

His initial connection to Erie House was formed in 2008 through his friend, Alex Montgomery, who was director of development at the time. “I wanted to volunteer somewhere,” he recalls, “and Alex told me, ‘We’re developing this board for young professionals—do you want to help?’”

And thus the Erie Associate Board was formed, spearheaded by Carlos and a handful of fellow Erie House volunteers and supporters. Today that board has 20 members and is responsible for planning two events each year—the Goose Island Fundraiser and the Tequila Tasting—to raise money and awareness for Erie House programs. In addition, Associate Board members serve as advocates for Erie House in the community, and many volunteer in various program initiatives.

Carlos also began tutoring in the TEAM youth mentoring program that fall and has volunteered in the program each year since. “The goal is to get these kids into college,” he explains. That goal has been attained rather consistently: In the past 19 years, TEAM has achieved a 100% high school graduation rate, and 98% have gained acceptance to a college or university.

“TEAM would have been a great program for me to be involved with back when I was in high school,” he says with a smile. “I’ve had the opportunity to develop a good relationship with the students I have mentored over the years.”

“I enjoy letting these kids see that it’s a bigger world,” he continues. “They need to understand that they have options instead of feeling stuck—you can go away to school, start a career, make a difference.”

Through his involvement as a mentor and Erie Associate Board member, Carlos has developed a deep appreciation for the agency’s mission. “Erie House is a great organization that helps families at all levels,” he says. “It’s an organization that reflects my culture, but Erie House does so much for so many different people. From early childhood education and programs for school-age kids to adult education—like English classes and workforce development—it covers everything for a community that needs it.”

Erie House executive director Kirstin Chernawsky looks forward to adding Carlos’s experience and insight to the board of directors. “Carlos has been a champion for the mission of Erie House, both as a TEAM mentor and as a key member of the Erie Associate Board,” she says. “We’re excited to have his leadership in the work of our board.”