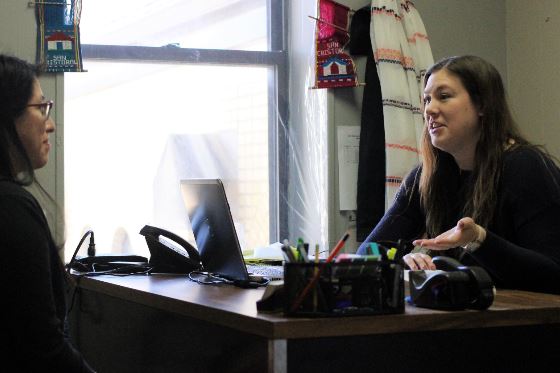 A new dawn has come for Victoria (name changed to protect identity), a Mexican-American immigrant who arrived at the US border to ask for protection in 2015. More than two years later, her case was finally presented before an immigration judge during a merits hearing. With Erie Neighborhood House attorney Megan Davis by her side, Victoria was awarded asylum status this past January.

The case was the first of its kind for Erie House, whose Citizenship and Immigration Services program launched a removal defense initiative last fall thanks in part to a grant from the Chicago Community Trust and the Illinois Immigration Funders Collaborative.

“Megan worked really hard along with her client to help the client obtain peace and security here in the United States,” says Viviana Mendez, supervising attorney at Erie House.

The trial attorney waived the opportunity to appeal, so the court decision is final.

The threat of a drug trafficking organization in power in Victoria’s home community in Mexico had caused her to fear for her safety and the safety of her family. Fleeing seemed like her only option. Victoria presented herself to immigration authorities and was granted a credible fear interview, after which she was paroled, allowed entry into the US but placed into a mounting backlog of asylum cases.

Under law, asylum status is reserved on a case by case basis for people who arrive in the US because of past persecution or a well-founded fear of persecution because of their race, religion, nationality, political opinion or membership in a particular social group. This threat is perpetrated by either a government itself or another actor—such as a drug cartel, gang or paramilitary group—the government is either unable or unwilling to control.

Each case is unique, and often times very complicated. “I don’t think there’s really a typical case,” explains Davis. “Right now a large subset of those cases involve Mexicans and Central Americans, most of them fleeing gang violence.”

Some asylum seekers can wait for months or even years before receiving a decision from a judge, their future hanging in the balance. Given the circumstances, the process can take an emotional toll on an individual.

“It’s re-traumatizing for people who have fled their country,” says Davis, “fled everything they know to come to a country they don’t know, a language they probably don’t speak or might not speak, and have to tell in explicit detail over and over again what happened to them, talk about the worst things they’ve ever experienced.”

“I always like to tell my clients, ‘I’m glad you’re here,’” says Davis, her voice cracking slightly as she expresses frustration with what she perceives as the US government punishing asylum seekers for leaving their country to seek protection here. “It’s a tough, long process to go through.”

Many nonprofit organizations working with immigrant communities simply don’t have the capacity to take on asylum cases and provide defense against removal proceedings. “They’re time-consuming and require a lot of resources and staff,” says Davis. “You can’t take a high volume of those cases because you just get overwhelmed with them.”

“I always like to tell my clients, ‘I’m glad you’re here.’ It’s a tough, long process to go through.”

As with most of its services—removal defense and asylum cases perhaps being the most resource-intensive among them—the Erie House Citizenship and Immigration Services program charges a fee, but that amounts to roughly 10-15% of the amount a client would pay to a private attorney.

“A lot of people have to go through this very complicated process alone because there’s not enough attorneys to represent everyone and, as migrants fleeing their home, they don’t have the resources,” says Davis. “Private attorneys are expensive, so they often end up unrepresented.”

In Victoria’s case, she was fortunate to connect with Davis when the attorney worked for Northern Illinois Justice for Our Neighbors. Davis brought the case with her when she was hired by Erie House last August to help launch the removal defense initiative.

Victoria also benefitted from keeping extensive records and documentation of the circumstances that forced her to flee from her home as well as her process of petitioning for asylum. The downside, of course, was that this mound of paperwork—vital to the success of the case—needed to be translated into English for her hearing.

Davis praises her colleagues at Erie House who stepped up to help translate the documents in-house, what she estimated to be as much as 50 hours of work time. “It was great that we had so many people help out,” she says. “It really was a team effort.”

When the date arrived, Victoria’s scheduled hearing almost didn’t happen. A shutdown of the federal government in January threatened to postpone all hearings on her court date, an outcome that would have pushed her case even further down the road. And even after the short-lived shutdown ended, the court found itself scrambling after having furloughed its contracted interpreters. Fortunately, the judge was able to make accommodations and proceed with the hearing.

The hearing lasted three hours. Sometimes a follow-up date is scheduled or a written decision is issued days later. For Victoria, the agony of waiting in the unknown ended relatively soon: After a short recess, the judge approved her petition for asylum.

“Oh my god, it was great,” says Davis. “I had no idea what was going to happen until she came back and gave the decision. It was a great feeling.”

For Davis and her colleagues at Erie House, the work to support immigrants as they navigate the immigration system continues. To learn more about the Erie House Citizenship and Immigration Services program, please visit www.eriehouse.org/immigration.