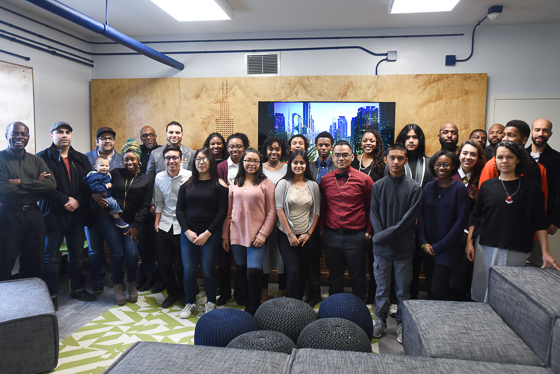 The Illinois Chapter of the National Organization of Minority Architects (I-NOMA) has been a community partner of Erie Neighborhood House since June 2015.

The chapter began its collaboration when Oswaldo “Oz” Ortega, an architect at Gensler and I-NOMA secretary at the time, and Maria Munoz, assistant director in the YOU program at Erie House, began talking about how they could collaborate. Oz was not able to become a TEAM mentor, so instead he asked I-NOMA members to present architectural workshops at Erie House.

Given increased emphasis on STEM (Science, Technology, Engineering and Math) in the YOU program, this initiative was a welcome addition to the academic programming at Erie House.

I-NOMA began by hosting these workshops for 10 students at the time. They have continued to do this annually—last year we had 21 students participate—and in June of this year we will have our fourth architectural workshop with I-NOMA. Through this existing partnership, I-NOMA offered 5 scholarships for its Project Pipeline program in the summer of 2016, and last summer they offered 15 scholarships to our students. In this camp, students get to discover the design process, how to create 3D models, and the pre-basics of architecture. This summer we are looking forward to continued participation in Project Pipeline as well.

Fast forward to the summer of 2017: Oz became the president of I-NOMA, and his mission was to implement the Design Build program here in Chicago for the first time. The Design Build program consists of the planning and remodeling of a community space, driven by the input and participation of high school students.

Erie House was one of the candidates I-NOMA had in mind. Due to our existing collaboration and consistency in attendance in the annual architectural workshops, including the Project Pipeline camp, they ultimately selected Erie House as their client for the project.

The Design Build project budget was $45,000, not including materials being used for remodeling and cost of new furniture, not to mention fees for professionals contracted both for demolition and construction. Everything, however, was provided free of charge, from supplies to pro bono services.

How was decision made to remodel the YOU space? The architects and members of I-NOMA scoped the entire building and ultimately decided to start with the YOU department, largely to the consistent participation of our youth in the different programs they offered.

The Design Build program included 5 participants from Erie House and 10 other Chicago students from the Project Pipeline camp. The team met every Saturday for 16 weeks from 9:00 am to 1:00 pm. During this time, they worked on drawings, meeting with the YOU staff and redesigning the space to better serve our participants and their families. Every student had input in the design of the space, with consistent supervision provided by the architects. Their guidance and mentoring was indispensable during the process.

We are tremendously grateful to I-NOMA and the students who participated in the program, because the results are beyond what we had imagined. The outcomes have been positive, there is an increase of attendance and our students feel proud of their new and beautifully renovated second home. And, in fact, that is the word most youth have used to describe the new space: it is just like “home.”